I’m not much of a course fisherman and the thought of sitting beside a stocked lake looking out on a shanty town of fishing umbrellas and green tents fills me with dread. The chance to fish a river is an entirely different prospect however and when the offer came from a farmer friend last shooting season, I promised myself I’d take it up. The water’s edge be it that of the sea, a river or a pond is a magical space to inhabit and I have always yearned to sit with a rod by one of the lazy waterways which drain our county. They always appear so tranquil in the summer months, glimpsed from the car as I cross an old brick bridge, all strewn with lily pads and hemmed in by tall grass and wild flowers.

Having arrived in the farmyard near Staplehurst I was welcomed warmly but quickly left to my own devices , the farming couple being busy, owing to the recent theft of motors and cabling from their harvesting equipment. A great deal of destruction and inconvenience had been caused, just for the sake of a little scrap copper.  Having expressed my sympathies I trudged off round the field of beans and beat a way through the rose bay willow herb and grass to the river’s edge. 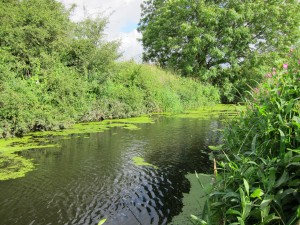 There was more clear water than I’d hoped for and within fifteen minutes my float was bobbing on the dark sheet which meandered through the encroaching duck weed. My other rod was on a ledger rig and I sat in my hole, trampled into the dense vegetation and waited. I should explain at this point that I’m no stranger to failure, especially when it comes to fishing and although part of me burned with anticipation, the majority accepted I was really just there to soak up the scene. After a few nibbles I manged to hook a small perch on my float rod, but the ledger was dead and I decided to attempt a bit of spinning. This had not been anticipated and I searched through my poorly stocked  tackle box for some time, before locating a tiny little spinner striped with mackerel colours beneath some rubbish.

Just about then the rain started and having dragged the immediate  stretch of river I went a little further on. A duff cast almost put my lure into weeds on the opposite bank, but in pulling it free I hooked into a little jack pike which resisted my drawing it in with the strange lethargy which seems customary with the creatures. That one went in the bag for Gabriel’s supper and spurred on by my success I moved up once more. On my second retrieve past a clump of lilies, the spinner seemed to snag then release and I  looked down to see a swirling flash of bronze which left the duck weed eddying on the greenish water.  ‘Damn, missed it,’  I thought to my self, but repeating the cast and retrieve once again the spinner snagged and this time it stuck firm. The thin rod, which I  found dumped by poachers in a small copse last winter, bent double and my heart began to pound. Now, I’m not accustomed to catching big fish, but luckily I know the theory and all of a sudden the need to use the reels clutch and play the fish properly became very apparent. After the initial slow tug which felt rather like hooking a lily, the pike went berserk, taking off down the river with a ferocity which would have snapped the line in a trice had it not been rapidly creaking off my cheap reel. At times it leapt  like a marlin and at others it dived to what seemed a surprising depth, but I kept his head up and the pressure on and eventually this splendid fish lay at the waters edge. Only one problem, I had no net and through the sea of stinging nettles I could see a steep bank of at least two or thee feet between me and the fish.  Eventually, after a period of procrastination,  which the pike exploited to made another bid freedom, my hand was forced and clutching the rod and a tussock of meadow sweet in one hand I leaned precariously over the water. It looked dark and deep and the fish looked none too friendly either, but steeling myself I stretched down and got a finger under the beasts gills. Out it came and there I was puffing and blowing, experiencing the exhilarating and totally unfamiliar feeling of success. 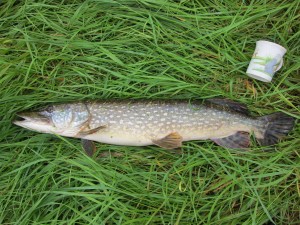 One Response to 3rd August 2012 – Fishing the Beult