Chequer, the impish jackdaw which I raised from a fledgling last summer, has returned to Foxridge. Having not seem him for six months, I was convinced that he had succumbed to a sparrow hawk or a shot gun or simply moved away, but all the same I would always call out wistfully to passing jackdaws. Last Saturday one replied with the immature ‘feed me cry’ and I knew immediately that my old fried was back. He left as bold as brass in the Autumn, but the intervening months have taught him reserve and it took a few minutes of calling for him to come down. Despite being confident with me again, he’s still wary of Em and Gabriel and I wonder what befell him in his absence? Although jackdaws can be taught to speak, he’ll ever reveal his adventures and I will be left to wonder. 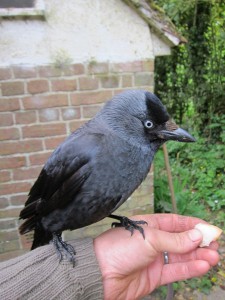 'A Bird in the Hand'

As I write Chequer is tapping at the window for breakfast and doing a fine job of clearing the spiders from around the frame as he waits. 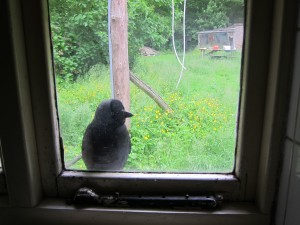 The oil seed rape is all but over now and as predicted the pitiful honey crop was already starting to crystallize in the cells. Rape honey is notorious for this and if left unextracted goes rock hard and has to be chopped from the frames and melted, resulting in many destroyed combs and a load of second rate honey. I have tarried before to my detriment, so yesterday I spun out (a honey extractor uses centrifugal force to draw the honey from the combs) what little honey there was, so little infact I haven’t even weighed it. I hope for warm weather to come, or I face another disastrous year for honey. 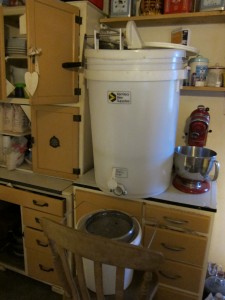