On Friday night, as up to a billion souls marvelled at the well trained livestock and Astro Turf laid on for the opening ceremony of the Olympics, I got on with the work aspect of the rural idle. The weather was threatening to break and relieving my father for a couple of hours, I carted round bales of hay from the field opposite his house to our barn down the lane. By most people’s standards our method is archaic, each bale being spiked with the old Ford 3000 and carted individually.  Still, as I reflected on perhaps my 19th return journey, it’s an improvement on my hay carting experiences of childhood. Possibly I’m a member of the last generation of country folk who hand balled the whole hay crop from field to barn. The tractor towed the laden trailers from one place to another of course, but all the rest was hot, sweaty, scratchy and itchy hard work. Still I don’t suppose a bottle of cold beer and a portion of fish and chips will ever taste as good as they did back then, sat on the last handful of bales.

Saturday’s poultry auction was broadly speaking a success. All my remaining ferrets from the first batch sold and one pair of hobs, a silver and a polecat even made £28. I earned my money on the little buggers though, as no sooner had I put the three pairs in their cages, they were out.  As one old boy commented, ‘if they can get there whiskers out the rest will follow’ and follow they did with remarkable ease. On the bright side, I met and chatted to all sorts as I waited with my ferret travelling boxes showing my wares to anyone who was interested. Five male quail also did well which went some way to compensating the meager £10 for a pair of lavender Pekin bantams. A lapse in concentration resulted in me buying two useless rabbits, but at £2 it wasn’t the end of the world and having watched a pair of stolen call ducks being recovered from a bunch of travellers, I went home fairly content. 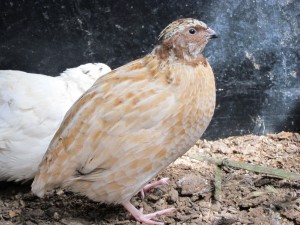 God Son J’s christening today.  A memorable occasion, owing in no small part to an ample lady sat before us in the church.  The mole on her broad, bare back  so resembled a plump current, it was a job not to reach out and eat it!