Most of the grain is harvested and the hay in, so for the first time in months the arable land and hay fields are cropped short and it’s time to do some serious lamping. For those unfamiliar with the term, it simply describes shooting at night by the light of a powerful spot light or sometimes just the full beams of a vehicle. Most people drive so large areas can be covered, but when I was younger I spent many evenings wandering the farm opposite my parents’ house, lamp clipped to my rifle scope and a weighty battery strapped to my side. Heavy batteries are a thing of the past now of course as L.E.D technology has resulted in immensely powerful lights which last for long periods on just a few AA batteries.

Lamping is less of a sport (though there are many who are passionate about it) and more  a means of controlling vermin species, chiefly rabbits and foxes.  It was the latter which B and I sallied forth last night to pursue over the wheat stubble at Hasleden. With new scope, silencer and bipod, B’s recently purchased .222 looked like some kind of sniper rifle and it certainly lived up to it’s looks, B shooting four foxes without a miss! The spot light with red filter proved very effective for not spooking the quarry (most animals don’t detect red light as easily as white), its only draw back being that it is hard to see a fox if it is not looking towards the beam, causing its eyes to reflect.   We also saw no end of badgers (probably wondering where their dinner had gone) and surprisingly few rabbits.

The cool, wet weather which dominated early summer, caused huge problems in the garden but at least it kept the cabbage white butterflies at bay. Now Em and I are squashing hundreds of caterpillars daily and still the sprouting broccoli plants have a distinctly skeletal look about them. The butterflies are only half the story though as cabbage moth caterpillars are also proliferating and unlike the black and yellow cabbage white caterpillars are stealthy blighters. Perfectly camouflaged they set up home in the heart or growing tip of brassicas, from where they can wreak maximum destruction. 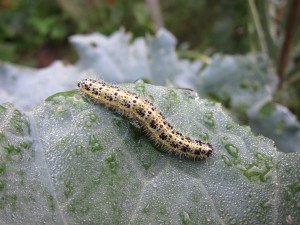 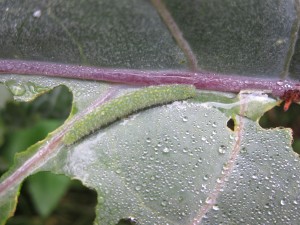