Since acquiring a second hand scythe for £3 at a local boot fair,  I have become an avid scyther. Apparently I’m not alone, as a quick Internet search into scythe technique (I really do live on the edge don’t I) revealed a whole host of weirdy beardys and blade wielding maidens, all heavily into using scythes. Unlike most of them however, I’m less interested in saving the planet with this environmentally friendly tool, but rather having an easy way to gather grass for my rabbits and chickens. I don’t pretend to be much good at it yet, but with a sharp blade it only takes seconds to harvest a sack full of greenery and that’sa vast improvment on using a sickle as I did before. Just to confirm everyone’s suspicions that I really should get out more, I must confess that the desire to fulfil a childhood ambition might also have driven me in this direction. As a boy I holidayed several times in the Auvergne region of France, in a tiny hamlet called La Jonchere. They were enchanted days spent swimming in the lake, climbing trees, drinking wine (aged twelve) whilst playing boul with the aging locals, prodding hornet nests and watching  Marcel collecting grass for his rabbits. Every morning this old boy would wonder down to the small meadow, dotted with decrepit fruit trees and effortlessness sweep down the grass in broad swathes, before bundling it up and taking it home. That truly rural scene has never left me and it pleases me to think on it as I send my own scythe blade floating through the sward. 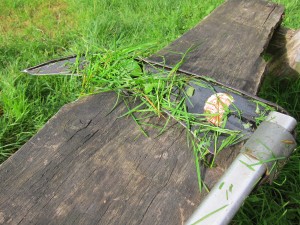 Blight has invaded the greenhouses, but having staved it of to some extent with fungicide we are starting to pick the odd ripe tomato. There won’t be much of a crop I fear and the pasata prospects are looking dire. We usually bottle around fifty jars of sieved tomatoes to last the year, but this year who knows? The pink brandywines, an American heirloom variety have proved a good choice. We are always searching for better flavour in our tomatoes and these are rich, sweet and tangy, with the perfect acid content – if only there were more! 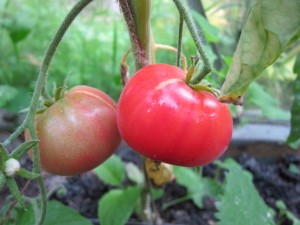