Whilst Autumn and early winter is mainly a time of converting the summers stock into meat for the freezer, there is an exception. Now is the time we traditionally buy in our weaner pigs, to take advantage of the free food associated with the season, acorns, wind falls, chestnuts, waste cereal crops and so on. This is important, as the cost of buying concentrate for our pigs  would make the whole exercise  of keeping them rather expensive and as we maintain our lifestyle largely buy cutting down outgoings, eating pork just wouldn’t add up! After trying several different breeds over the years we have settled on large white, crossed with a traditional pig such as a saddle back, which we find gives the right balance between meat and fat in the finished carcases. Although we appreciate a good bit of fat (and value it to produce lard for our pastry) with a feeding regime  were the pigs receive large quantities of carbohydrate rich food with less protein  than a commercial ration, the traditional breeds can become excessively flabby. This years newcomers are Oxford sandy black, large white crosses, a first for us.

Last spring I planted the pig run with jerusalem artichokes, taking advantage of the well cultivated soil left by the previous occupants and now the enclosure is a positive jungle. It’s hard to get a gyms of the spotty youngsters through the steams, but the satisfied grunts and slapping of piggy lips tells me they are enjoying their new surrounds. On this, their second day it is hard to imagine that those four small beasts will ever clear the little wilderness, but in a fortnight every steam and leaf will be devoured and then the rooting will begin in earnest and continue until every knobbly tuber is found.

Killed several sasso cross indian game meat chickens yesterday, which all look well grown a meaty. A partial success in my efforts to breed better table birds, for despite the  carcases having good conformation, three chickens died last week from suspected hart conditions. Commercial meat birds such as sassos are notorious for their short life expectancies and it will be back to the drawing board next season to try and produce heathier stock which can survive a slower rearing. 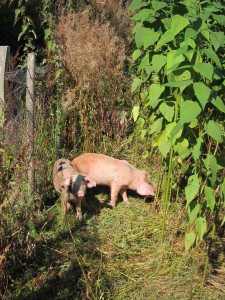