For now at least the rain is gone, driven on by  North winds which pale the tarmac of the winding lanes  with their cold drying breath. Despite having waned for a day, the moon appeared full last night and lit the freezing countryside about the cottage with perfect clarity.  Standing by the pig pen, satisfied grunts and the sound of slapping jaws in the shadows behind me, I took in the scene. Trees appear more starkly naked at night, their skeletal fingers silhouetted  against the white light and above them, wisps of cloud like lonely spectres, glowed pale  in the otherwise clear expanse. Up the lane the the face of the moon  peered between the cowls of the oast house roundels and had a fox been padding across the frosted field before me I would have seen it in sufficient detail to admire it’s white tipped brush. 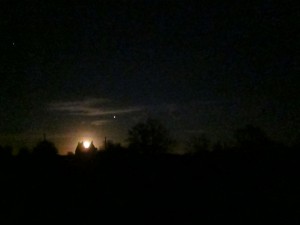 For me, the punctuations in my life when I am enfolded and transported by the wonder of the natural world, are my moments of extasy. The golden seconds that others  find in music or religion, art or football come to me when I am alone in the fields and woods or beside a lonely autumn hedge. Then all of a sudden I am struck by a scene which at once  humbles and  fills me with a sense of power and energy, as if for a instant instant, through my dumb admiration, I were connected to that vast and magnificent other.

This morning a glorious sun rise crowned with ranks of rich pink clouds revealed the fist true hoar frost of the winter. 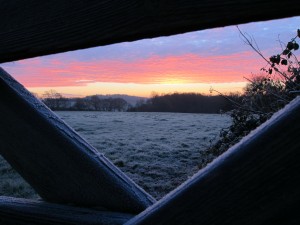