I feel like a child who has broken up from school! The year’s hedge laying is complete and the final course before Christmas took place last Saturday. Actually I take that back, as I recall that I have salmon to smoke tomorrow, logs to cut on Thursday and eighteen Christmas fowl to kill and pluck on Sunday.

The course, a bespoke ferreting day, went swimmingly (not literally as the weather was in fact very kind) with six rabbits taken from two buries at  a local pear orchard before lunch and the participants’ own ferrets having a good run in the afternoon. At one point the action got a little frantic as I threw myself here and there, seizing half netted rabbits and plunging my arm down holes to retrieve others which were back netted. Diana and Chris were on the case as well of course, but when it comes to lunging headlong into bramble patches, I always feel I should lead the way. 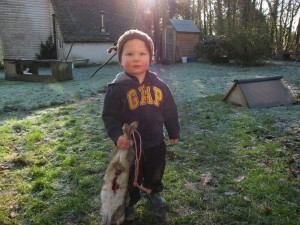 Gabriel helps with the catch.

The latest bout of hedge laying was a gruelling affair, but after five days hard graft, the last one accompanied by my father, both stretches of garden hedge were beaten into submission and some kind of order. I have never known hedges so entangled, old hawthorn ‘birds nested’ from years of cutting to the same height and twenty foot hazel, knotted up with trailing holly growing like Medusa’s hairdo through the straight stems in search of light. 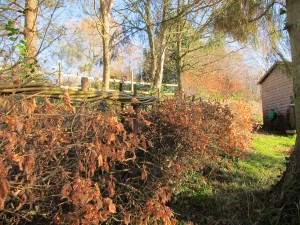 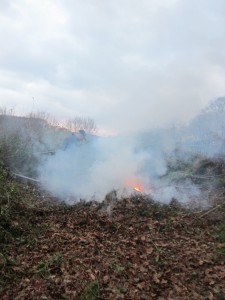 The weather has turned cold and clear and this afternoon I had the privilege to witness a perfect sunset on the flatlands of Romney Marsh, as I waited for boar by a reed bed, where last year I shot three in one evening. On such a bright day, so near the equinox,  the transition between day and night is rapid and dramatic. On arrival the sun, low in the sky but still brilliant looked out over an idyllic scene. The downy seed heads of the reed, all leaning south as though swept by a great North wind, seemed pale as frosted grass with the light behind them whilst about their shady stems pheasants, truly wild marsh birds, milled about in search of a final morsel before roosting. Beyond the dyke, mute swans cropped the abundant rape and ever so often the rhythmic, rasping whistle of air forced through colossal pinions  caused me to look up and observe their coming and going. Back towards Appledore the dark outcrop of land, which centuries ago marked the old coast line, warmed with orange tones in the failing light.  It must have been a full mile away but still the gappy hawthorn hedge at it’s brow, half cut and half left, was as bold as  the battlements on a castle wall.

Soon the sun was gone behind the distant buildings of Rye and whilst the streaks of mauve and orange settled to a single line of smouldering light on the horizon, the frost began to bite and the marsh awaken from the idle slumber of day. Where the swans still grazed on the neighbouring  crop, the dark form of a fox stole through the foliage.  Before me the pheasants, quitting their cover took to the stunted hawthornes by the rail track, watched by a pair of marsh harriers which patrolled the darkening swathe of reeds in perfect silence. Far away a cormorant, its grace in flying reserved for below water, plummeted clumsily from the sky into a sturdy looking oak and I watched for a while as the bird rode up and down on the flexing bough, until the whirring of the first ducks took away my attention. Silhouetted against the western sky, team after team of mallard, teal and shoveller emerged from the gloaming and raced over my position towards the main dyke, fed with grain by the farmer. Some day soon there will be a fine evening flight, but this evening no gun shots erupted and long after my eyes had became useless I listened to the music which accompanied the waves of drumming wing beats overhead, that of  whistling and piping, course quacks and bubbling calls which filled the darkness.

I didn’t see a boar, but I shall be back as fresh rootings and tracks point to a resident sow, accompanied by well grown young.