Ground Ivy – Flavour of the Month

I’m not claiming that ground ivy is, or even should be the most popular wild herb, but it certainly deserves more attention than it gets. Over the years I’ve fallen in love with this  creeping plant of the woodland fringe and plan to start making more of it. I’m not keen on it  in a culinary setting, but for me it makes the best herbal tea that the Kent country store cupboard has to offer. It’s not to everyone’s taste, but isn’t that the mark of any quality or genius? Think Parmesan cheese, think Stravinsky (not something you are often required to consider  simultaneously). The ‘don’t like it,’camp taste bitterness and metallic overtones, I and other admirers experience notes of mint, sage and something elusive all of its own, bundled  into a refreshing mouthful which can be rivaled by little else. I often take it green, just steeped in boiling water, but now I’m drying it in quantity to last the winter and to mix with lemon balm, mint and whatever else comes to hand. 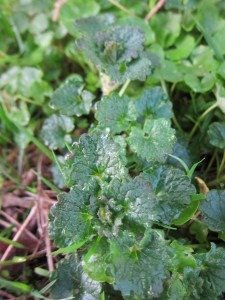 My favourite quote in connection with the pervasive scent of ground ivy came from a man on one of my courses. ‘That is the smell of catching frogs’. An apparently random statement, but expanding on it, the chap explained that as a child he and his brother would often hunt for frogs along a wooded stream. The smell of the bitter herb bought the memory flooding back and he realized that the amphibians must often have been hiding among  ground ivy, though of course he thought nothing of it at the time.