After the difficult conditions for bees last year I was hoping for something better this summer, but again things are not looking promising. Like the hawthorn (which is out now), my colonies are a month behind and despite being healthy, simply haven’ t built the worker numbers to capitalise on the abundant blossom and flowers. The icy Spring past is to blame for that and once again the weather is not good and thousands of bees or not, there won’t be a drop of honey until the sun shines!

On the up side, there is little sign of varroa in the hives. Despite being told at a lecture on these parasitic mites, that without treatment a honey bee colony with varroa will die within 4 years, I am now entering my 9th year chemical free! I may be an apiarist  in a fools paradise, but it appears that my bees have developed some resistance to varroa, or at least the pathagens the mites carry. This is not entirely surprising, as when I resumed beekeeping many years back I collected wild swarms to put in my hives rather than buying from another beekeeper. Admittedly there was a cost factor, but more over I had noticed  wild bee colony reestablishing themselves, after having been all but wiped out when varroa arrived. That to me suggested a level of resistance in the wild/feral stock.

This year more than ever I am reminded of the old saying ‘ Ne’er cast a clout till may is out’. Assuming that it is a reference to ploughing and sowing when hawthorn is in bloom, it seems to make some sense. This season has provided an extreme example of how hawthorn reacts to a cold spring. Whilst other trees and flowers seem to have been able to accelerate the onset of blooming in response to the onset of warm weather, the hawthorn seems never to have made up the ‘lost’ time. Soil temperature takes a long time to rise, even when the weather turns hot and perhaps the flowering of hawthorn, though not necessarily linked directly,  coincides with its attaining a reasonable temperature for germination. Seth has only just sown his maize for example and Rodger has held off planting kale until now as well. 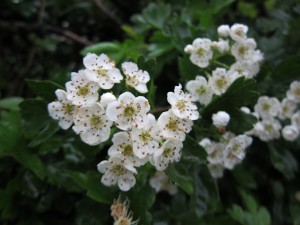 Hawthorn or May Blossom