It is easy to imagine that the domestic rabbit is a passive creature without urge or instinct when seen in the hutch, but give them a bit of space and the buried instincts come bursting out. My New Zealand doe has certainly become a bit of a character since I’ve had her despite being of a breed developed for intensive meat and fur production. Late last year she spent a while living loose, and when I did manage to capture her I  her white belly was swollen with young. I had noticed her returning from the wood  several  times and clearly she had been fraternising with the natives!

It is not unusual for a flirt kindling to end badly and that being the case my white doe was left living alone in the long enclosure which skirts the veg patch. Some while back I glanced out of the widow to see her clambering out over the 3 foot chicken mesh and before I could get down the stairs, the lustful creature was off into the woods. Half an hour later she was back and virtually surrendered herself, running straight up to me.

Sure enough she was pregnant and kindled two nights ago depositing her young (as rabbits do) in a luxurious nest made of fur plucked from her belly. 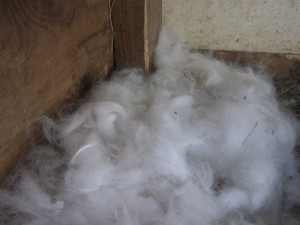 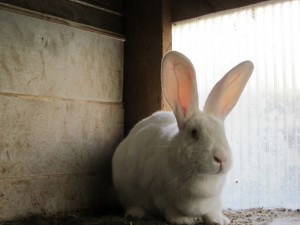