Last night was hot and stuffy and at 6am there came the sound of distant shots through the window which had been flung wide to let in the cool air. B was already busy on the hill tackling the first flight of pigeons coming to feed on the patches of laid wheat and my first instinct was to grab the gun, whistle the dog and go. Duty called however and by the time the myriad of animals we have at the moment were set up for the day I didn’t get up there till nine.  Little was moving by then and other than an early woody bagged as it came into the decoys, I had few other opportunities.  There are worse ways to spend a couple of hours though, than sitting up against an oak, idly pulling cleaver seeds from Treacle’s  ears (our black cocker bitch) and watching the sea of wheat giving up it’s final hint of green to the endless blue in a  shimmering haze. In the distance a greater spotted woodpecker wound it’s way up round a telegraph pole, it had about as much hope of finding prey as I did,  I thought as it looped off to the nearby wood.

The bees have been hopeless this season. The honey crop is down at least 75% due to the weather and despite my best efforts several swarms have been lost. By trimming a queen’s wings any swarm that departs the hive with her can’t go far, and one such swarm has been clinging to my chicken house for the last few days. 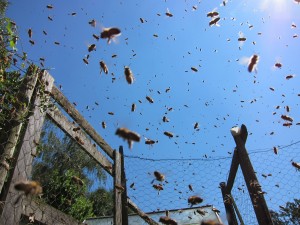 Swarm in the air

Normally I’d scoop them up and put them in an empty hive, but being in amongst chicken wire and all sorts that wasn’t an option. A hive placed near them clearly didn’t take there fancy and at lunch time the whole lot (apparently) left in a cloud for the woods. Cursing the loss and wondering how the queen had managed to fly so well, I got on with other jobs. Over the next few minutes some of the bees began to return and guessing what had happened I went  to the spot where the swarm had previously been. There I noticed a small cluster of bees which had been left behind and amongst them I found her highness  desperately trying to take flight. Picking her up I put her in the empty hive and within 20 minutes the entire swarm had returned and was busily setting up home in the box. Not lost after all. 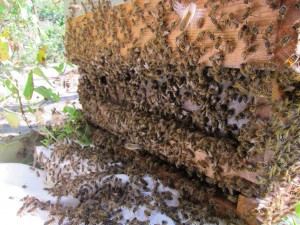