A seldom seen cousin visited over the weekend and he couldn’t have chosen a worse one, as all of Saturday was spent mucking out the lambing shed.  All credit to him though, for he took up a fork with all the appearance of enthusiasm,  to help bring the hard to reach edges of dung towards the digger. Using a mini digger is a little unorthodox, but with a bucket adapted to grab manure by the welded addition of long teeth, it is surprisingly effective. Vast quantities of manure are vital for our cultivation of vegetables and three, four ton loads of prime sheep muck are currently steaming away quietly in the woods behind the cottage, ready for winter 2013.

The final honey crop came in on Sunday and this morning I put the meager 40lbs into jars. That brings the not so grand total for this year to around 150lbs, less than a third of what I hoped for. Sweet chestnut is one of the last major sources of nectar around here and sure enough the warmed honey which showered from the frames as they span in the extractor’s belly, was a dark amber. Chestnut honey has an extremely distinct flavour, tangy with a strong almost musty character which was reflected in the sent wafting from the plastic drum  containing the centrifuge. Anything the bees gather from now on will remain with them for winter stores, but inevitably I’ll have to top them up with sugar syrup come October. 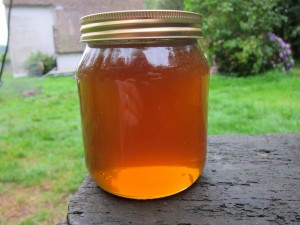 The mice have been gracious enough to leave us a few peaches and despite being small they are divine. The white flesh is juicy and sweet with a delicate aromatic flavour, the essence of which exudes from the fuzzy skin with a beautiful perfume. 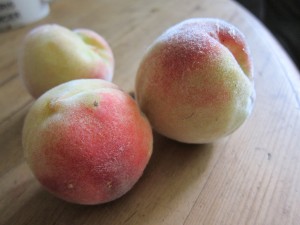