Anyone who knows me, even vaguely,  knows I’m not one for spending money unless there’s a bloody good reason. So despite shooting being a passion which has spanned two decades, I’ve never possessed a ‘nice’ shot gun, sticking instead to the functional end of the market.  Recently though all that changed when I caught wind that B, friend and gun dealer had an old damascus barrelled William Powell and Son for sale.  The moment I saw it I knew it was for me –  an exquisitely crafted weapon with sufficient flaws to bring it down to a very modest price.  Now for the first time I have a gun of which I am proud.

Looks and feel aren’t everything though, especially in a gun, for although it’s better to miss in style, it’s preferable not to miss at all.  Happily on my first outing with the old girl, (she is over 100) she did me proud and fears that her ‘uniquely’ cast stock might be a problem flew out of the window as the first pigeon crumpled and fell. 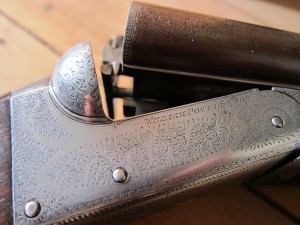 Today I waited in the little woodland clearing at Haselden, hoping for a chance at  the pigeons which are still coming in on the patches of laid wheat. In the end I had one pigeon, one squirrel and one crow, the latter being a half decent shot. The harsh calling of a pair of crows came to my attention and raising the gun, I saw their movement through the oak before me. It doesn’t pay to move when shooting corvoids, being the most cautious of birds, so freezing I waited until one of the black shapes cleared the leafy canopy, stepped forward, swung through and fired. The crow was a fair way up, but to the report both wings folded beneath its body and down it plummeted.  I have never known a gun for killing so cleanly and I assume the thity inch barells must be fairly tightly choked.

On a walk into Goudhurst Em and I found the first cep of the season –  let’s hope it’s the first of many!