Today in a large cardboard box in the shed, my black naked neck hen has been rewarded for 21 one days of patient waiting. She has been sitting on buff Orpington eggs and managed to hatch two out of five, which is I suppose better than nothing. They’re an ugly breed of chicken, the naked neck, but they do make good mothers and are also easy to pluck – for obvious reasons. 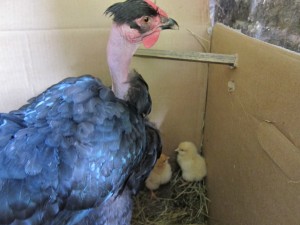 About a month ago I bought two continental giant rabbit does with the intention of breeding from them. They were growing well and apparently healthy until a few day ago when I found the steel coloured one apparently  paralysed in the hind quarters. I suspected a sprained back and after nursing it for a couple of days it returned to health. Two days ago  I discovered the other one completely unable to move, an hour later it was dead and today so is the other one. I’m rather peeved about the whole episode, especially as I have no real idea  what might have caused them to die.

S and S came for dinner last night and just before falling asleep on the sofa male S confirmed that this is the worst year he has ever known for hay making. He predicts a glut of rough ‘bullock  hay’ which has been rained on and a shortage of anything decent come the winter. S and his father make thousands of bales of hay, haylige and silage a year for his 108 head of cattle and also to sell, so he should know.

One Response to 2nd August 2012 – Arrivals and Departures