In shooting jargon the term ‘ release pen’ is slightly misleading as really you want the poults to stay in for as long as possible to develop a good sense of ‘home’. One of the techniques used to achieve this is the use of pop holes, one way openings in the pen’s perimeter which allow the young birds to get back in if they flutter over the netting. These contraptions should have in place on B’s pen a fortnight ago when the birds arrived, but a delayed order for them has meant the job of rounding up escapees being done manually. Each morning B or I, or occasionally both of us  have opened the gate and patiently driven the birds round the pen and in. 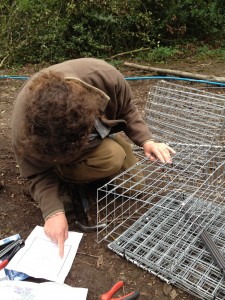 I’ve cobbled together pop holes from scratch, using grates and chicken wire lots of time, but being faced with a pre-made flat pack was a little bemusing – not least because  it involved reading instructions which we all accept is an entirely unnatural act for the male of our species. In the end it wasn’t as taxing as I feared and we had them in within the hour.

Growing pop corn is a new project for this year and to my great relief ‘Brit Pop’ turns out to have rather pretty pink silks,  unlike the normal sweetcorn. This is good because I made no record of which were which after planting, trusting instead to my memory! 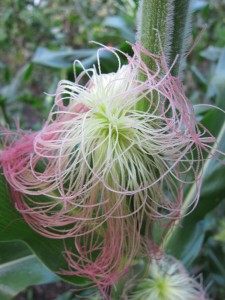 My parents produce the best mutton imaginable by running on wethers for two or three years.  Usually I like to slow or pot roast it, but when the meat is this good it works wonderfully served pink.