Describing the advantages of ‘dirty weather’  for  shooting geese a couple of days back appears to have been evocative, because yesterday was filthy! A proper autumn day, fretting winds  tugging  impatiently at the first dying leaves accompanied by torrential rain which plastered them to the sodden ground. We certainly needed the rain, as vegi patch and fields alike were becoming rather parched. The sudden soaking will have the field mushrooms pushing up in the old plum orchard and,  as we do every year, Em and I hope for a bumper crop to fulfill our culinary fungal fantasies (of which there are many). There will be other fungi of course, many of them quite delicious, but for every day use the field mushroom picked while the gills are still salmon pink, takes some beating.

Last week on a warm day I closed up my eleven hives for winter. The queen excluders all came off (to help the bees  move around each hive freely in their winter clusters) as did any empty supers, of which there were many. Despite the warm weather lately and the apparent availability of flowers such as clover and ivy, all of the colonies were very low on stores. Without intervention most would  perish  over the coming months and I have begun to feed sugar syrup, nearly 20kg already and I’ve only just started! It’s amazing how multiplying even quite a modest requirement by eleven soon adds up!

The pickers have been through the orchard in the valley and in these days of thriving apple juice and cider sales the majestic standards had been scoured for fruit. A few years back we all bemoaned the terrible waste,  as tonnes of unwanted apples were left to rot amongst the local orchards, but at least there were always plenty to stock the larder! Thankfully the pickers appear not to have been blessed with much height and as health and safety has done away with steps and ladders, the upper reaches of some of the trees still hold a few fruit. The cookers will keep for a while there, ripening to a rosy blush in the Autumn sun, but the red eaters are already spoiling and I have cored, ringed and dried several trays for storage. 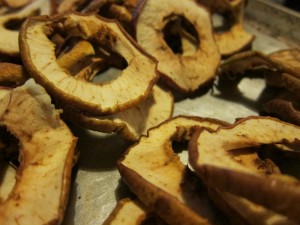