Sorry about the lack of blogs of late, but as I said things have been rather busy! I’ve just returned from four days in Chaily, East Sussex where I was helping a friend re roof a stable block. It’s a wee bit larger than I had remembered and I’ll be back next week to put the six and a half thousand odd tiles back on the now newly battened roof.

Last Saterday, before I went off I spent the whole day cooking and selling a monumentally sized curry for another fried (that makes two whole friends!) at his music festival. The ingredients to fill my 72l capacity potjie pot with beef curry came to just under £300, but as that provided around 220 portions at £6 a go that’s not half bad. Often it’s lamb or pork spit roasts I’m doing at events and in comparison using the potjie is pretty chilled out. Once it came to the boil (I must have been watching it a little too hard, as it took nearly three hours to do so) a very low fire kept the huge vat of food blobbing away gently, (rather like the hot mud wallows one sees on documentaries) and all I needed to add was the odd stir. Though I say so myself, the curry was a hit and it was a very enjoyable 19 hours spent chatting to drunk girls, winding up the festival staff and generally being a nuisance. The pot was finally emptied at 2am. 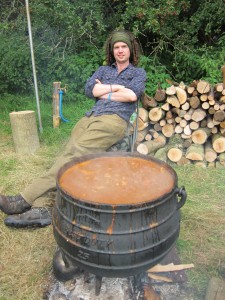