Outside, the persistent drizzle that isn’t quite rain, makes the horizon indistinguishable from the sky in it’s greyness and the currant bushes’ yellowing leaves hang limp and dripping. As predicted the wet has bought on the field mushrooms and I picked a first handful.  I had intended on taking a photo for this blog, but no sooner were they over the threshold than Em had them in the frying pan beside a few rashers of bacon – I didn’t complain too much!

The crops continue to come in from the garden; borlotti beans, dried runners and haricots are piled in adjacent crates over the rayburn to dry and for the first time they are accompanied by cobs of popcorn. Gabriel enjoys a bit of expanded maze germ (well who wouldn’t) so we’ve dabbled with some  ‘brit pop’ this season and despite the worst summer in living memory for growing corn, it seems to have done alright. Once the kernels are dry, I’ll give them a go and report back.

Swallows and house martins still remain in good numbers around the cottage, although migratory groups can be seen drifting south on most days. In the mornings when the  cattle come to graze opposite the cottage, a couple of dozen of the small birds can be seen swooping and turning about the feeding beasts,  gathering the insects pushed up by their gentle ambling. Gabriel loves the cows and on rising (or being risen) insists on gazing out of the window at them, before emitting a low noise accompanied by a ridiculous grin, which to the doting parent is clearly a ‘moo’. 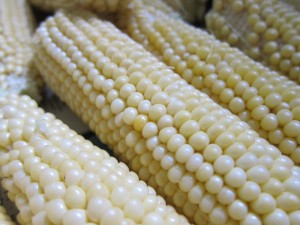