Our only vehical, a top heavy looking Kangoo  still languishes at the the car doctor’s (as Em refers to the garage) with an impressive and alarmingly expensive sounding list of ailments. We hope to retrieve it this afternoon, but until them I’m on the push bike. Years ago whilst living in London I cycled everywhere, cheating death which lurked in every bus,lorry and rude boy beamer for a full four years. Pedalling along the local lanes is an altogether safer,  more sedate affair though riding home last night in the gathering gloom I did question the wisdom of wearing my brown trousers and murky green fleece. This morning I pulled into the drive brandishing a rabbit for my ferrets (I was behind a van which knocked it down), having just been stopped by the old coppice worker who practices the art with his grand son in the woods behind the cottage. Tickled to see me on my bike wearing a  fluorescent, reflective pullover (after the concerns of last night), he had stopped to pass comment and soon we were chatting about his work and the weather. Quickly the conversation turned to his ailments, clearly a favoured subject for he quickly reeled off an impressive list of complaints. Proof of the arthritis which is slowly claiming his mobility was thrust from the car window in the form of a hand, held in a half grip position and swollen round the joints. But despite it all he’s still in the woods daily and with a laugh and a wave he was off to work with a contented air.

Aaron  arrived with a few pints of fresh milk the other day which had been begged at a dairy farm where he had been doing some building work. Today I finally started it on its way towards being a couple of rounds of brie.  Having cultured the warm milk with starter and inoculated it with Penicillium candidum mould, in went the rennet and I left it on the back of the Rayburn to form the curd. Before bed I sliced the curds and put the small cubes into the moulds. This morning the fresh cheeses were tuned out and salted and have now begun the maturation process. They will be turned twice daily until the white mould appears, then left for a week or so before eating. 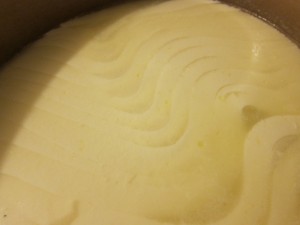 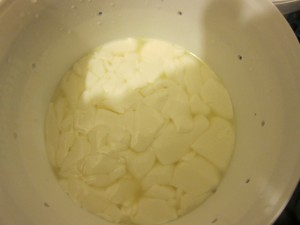 'Mouldy' cheese - curds in the mould 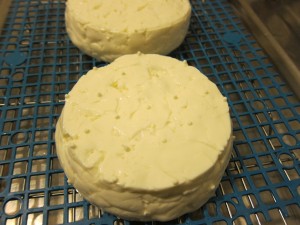 Fresh cheeses turned out for salting