Yesterday was a wet and generally unpleasant day, so I did what any sensible individual would do and went out shooting with a bunch of like-minded idiots. The rough shoots, as opposed to the more formal days (still a relative term with our shoot) when beaters, picker uppers and guns are all on parade, are the the highlights of my shooting calender. As a boy I dreamt of having the opportunity to amble all day with my gun, travelling miles in pursuit of wily game and a rough day with Hugh is pretty much a manifestation of that – though we are not permitted to amble of course! First drive was through an asparagus bed, thick with dead ferny foliage and also pheasants, as Hugh must have put near forty out.  I have never looked in to the edibility of Asparagus seed for birds and animals, but I can only assume they enjoy it, as accompanying the pheasants were wood pigeons which would be there for no other reason than to feed. Generally the standard of shooting was not good though for once I bucked  the trend, managing a left and right with my opening shots and we walked from the field with three brace and a pigeon.

Once the annual touture of the ‘holly hedge’ had been endured we continued on to a local farm where we were confronted with a block of maize totalling around fifty acres ,which to the uninitiated is a hell of a lot! Eight men and two dogs were never going to do the situation justice, but we enjoyed trying. Invisible to one another through the ten foot crop, we swept the fields in ragged lines, firing at fleeting birds when the opportunity arose, whilst Treacle and Hugh’s dog Tiffin ran themselves to exhaustion between the cane like steams. Half way through we stopped for lunch, sheltering from the rain in the Landrovers , steamed up by wet clothes and dogs and then back we went to comb the maize for more birds. I had one more hen and by the time of our early ‘wet day finish’ there were eleven pheasants and two pigeons to divide between us. It is worth worth noting that there was  rats tail plantain seed (of which there were thousands growing between the maize plants) in the second pigeon’s crop – something which I have not noticed before. I have read that they are nutritious, but for pigeons to take them in preference to maize suggests that they really are full of good things. 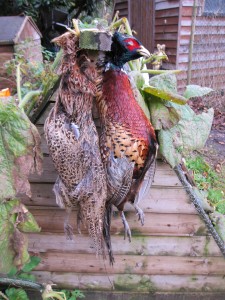 After gutting the cockerels this morning I headed over to Bryn’s to help raise his pig ark out of the mud. The rain has been so severe this year that we are all in the same boat (we may be quite literally soon) trying to do the best for our animals in very wet conditions.  His pigs have now been upgraded to luxury accommodation and they look extremely good, very solid with a back ends which scream out ‘honey roast’ to me every time I see them.