My perseverance has paid off and on only my second visit to the marsh I’ve managed to bag a boar! Not a large one admittedly, but a well grown youngster and like one of last year’s – totally white. Theories are divided as to the presence of white boar in England, some sighting natural variation ,others wild animals having interbred  with domestic pigs at some point. 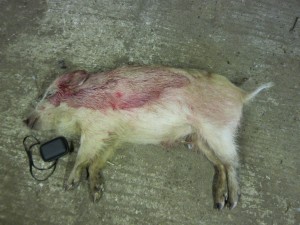 It wasn’t a particularly exciting event I must confess, although one is always struck with a little ‘buck fever’ (as our American friends term it)when the pray is sighted and the adrenalin kicks in. This must be a feeling that hundreds of generations of hunters have felt before me.  In times past, a surge of nervous energy must have  very useful, as to kill a large animal by hand and on foot would have taken a huge amount of the strength and stamina, now sadly it just makes the aim a little shaky.

After dozing for half an hour in the comfort of my farmer friend’s four by four parked by the rail tracks , I was rudely awakened by the small diesel train which traverses the flat marsh land. The sun was setting and again I watched as the harriers hawked and ducks mustered to feed, until I could see no more. Then, as my thoughts turned to home, a sound came from the gloom of the reed bed before me. The unmistakable noise of powerful animals pushing through the dry stems which cracked and crackled like an igniting fire. I strained my eyes and even scanned the the field edge with the scope, but the light was gone and expecting to see startled boar taking flight, I turned on the spot light. Lit up in a small clearing were  four young  pigs and to my great surprise they utterly ignored the beam upon them and carried on rooting. (Later it occurred to me that they were probably very used to the train head lights). Propping the torch on the dashboard, I followed the nearest animal with my sights and as it turned side on, pulled the cross hairs smoothly to the killing zone and squeezed the trigger. The unleashing of a .308 in darkness is always a little startling, what with the recoil and flash of muzzle flame, but I recovered in time to see the boar drop, then spring into the cover of dense reeds. I knew it was hit well and would be dead in an instant, but as I feared, the blond boar was impossible to spot  amongst the pale  stems of reed, which formed a barrier as tall as myself and twice as thick (which would be very, according to some).

Having made it back to the farmhouse along the exceptionally muddy track, I asked D. to take a look in the morning and confident of a phone call the next day I made my way home. Sure enough, this morning the pig was delivered, having been found close to where I had shot it and so a couple of hours were spent skinning and butchering. The meat which is usable looks excellent (some was lost due to the animal being un-gutted over night) with a decent layer of marble white fat. 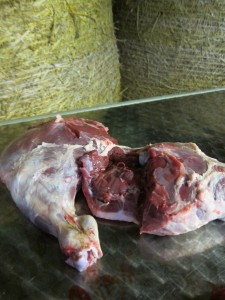 Christmas  decorations have gone up and Gabriel is so taken with the tree that it is now kissed good night, even before the dog when he goes to bed. 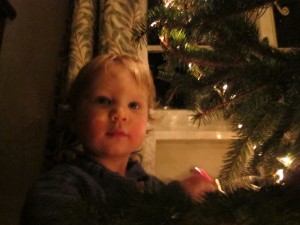