Up at 4am to do the animals and then out early for another go at the pigeons. By 5.30am woodies were flying just about everywhere, save for the spot that B and I had chosen, and for a couple of hours we watched them trickle from the chestnut coppice as the sunlight crept golden across the wheat field. We packed up with three in the bag and a lot of lead wasted!

The raspberries have done well this year, which is lucky considering most of the strawberry crop was lost to the combined forces of mice, mould and slugs. The freezer is stocked with whole fruit and coulis, the preserves cupboard stacked with Jam and we’re still eating them fresh. Our sixteen month old son Gabriel blows hot and cold about the bumpy, seedy berries, gorging on them some days and on others spitting them out with the most terrible look of disdain . 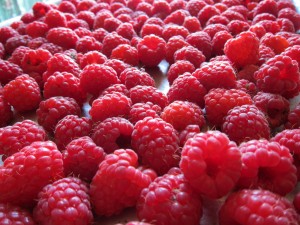 The continuing heat prompted us to take Gabriel for his first trip to the beach.  His verdict?  Sitting in  cold water getting splashed by waves – o.k.  Eating fish and chips on the beach with the  sun on his back and the gulls overhead – marvellous. I couldn’t agree with him more.  Pebbles were also a great hit, literately in some cases, as in his attempts to throw them he landed several on his head. On our way home across Romney Marsh, the rape harvest was well under way and the first  spiky rows of yellow wheat straw lay waiting for the bailer. A few more days of sun and they’ll be starting around here.